The Douro river, with its 928 km long, is one of the major river basins of Western Europe. After its slow journey through the Spanish cereal plains, the Douro forms the natural border between Portugal and Spain. This area, known as the “Douro Internacional” in Portugal and ” Arribes del Duero” in Spain is a wonder of nature by the immense beauty of its landscapes and biodiversity.From Zamora to Alva Barca which lasts for about 150 km, the river drops 640 meters to reach an altitude of 150 meters above sea level. It is a violent descent creating a stunning border. The topography is characterized by the collection of the river system , where the valleys are often steep slopes and cliffs of 400 meters high, forming a landscape of breathtaking beauty. The Mediterranean climate of this region, characterized by the softness of the cold seasons with almost no frost, has been exploited by man for cultivation of exotic species in these latitudes such as olives, almonds and citrus.It is along the Douro River softened by five dams, as a result of a colossal work, that a community of birds, some endangered, found their habitat. This is the case of the Black Stork, Griffon Vulture, Golden Eagle, Eagle Bonneli, Royal Milan and Egyptian vulture. They found refuge between the cliffs washed by the waters.

International Douro is a rare treasure that will impress you so much, while kayaking, which is also the best way to discover it. 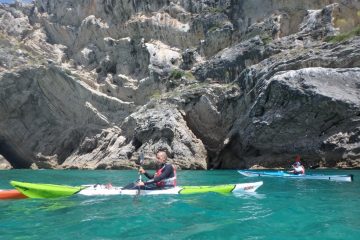